Exercise 1 is easy: at the end of Chapter 2 the corresponding products statement was proved, and the obvious dual statement turns out to be this one.

Exercise 2 falls out of the appropriate diagram, whose upper triangle is irrelevant.

Exercise 5: Let the coproduct of \(A, B\) be their disjunction. Then the “coproduct” property is saying “if we can prove \(Z\) from \(A\) and from \(B\), then we can prove it from \(A \vee B\)", which is clearly true. The uniqueness of proofs is sort of obvious, but I don’t see how to prove it - I’m not at all used to the syntax of natural deduction. I look at the answer, which makes everything clear, although I still don’t know if I could reproduce it. I understand its spirit, but not the mechanics of how to work in the category of proofs.

Finite products: we just need to check binary products and the existence of an initial object. Initial objects are easy: the trivial monoid/group is initial. Binary products: the componentwise direct product satisfies the UMP for the product, since if \(z_1: Z \to A, z_2: Z \to B\) then take \(z: Z \to A \times B\) by \(z(y) = \langle z_1(y), z_2(y) \rangle\). This is obviously homomorphic, while the projections make sure it is unique.

Exercise 7 falls out of another diagram. The (1) label refers to arrows forced by the first step of the argument; the (2) label to the arrow forced by the (1) arrows. 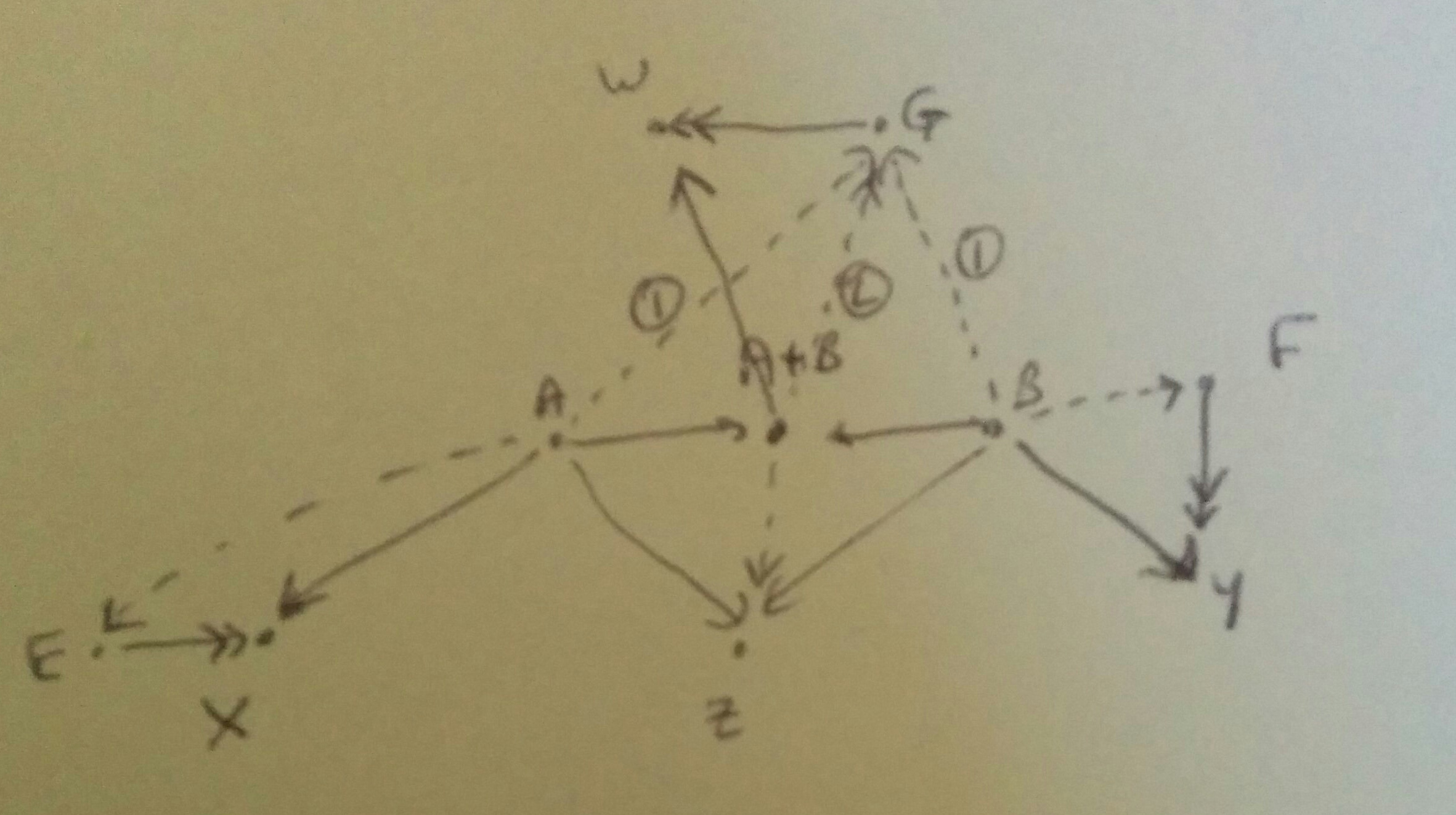 What about an injective poset? The dual of “posets” is “posets”, so we can just take the dual of any projective poset - for instance, any discrete poset. Anything well-ordered will also do, suggests my intuition, but I looked it up and apparently the injective posets are exactly the complete lattices. Therefore a wellordering will almost never do. I couldn’t see why \(\omega\) failed to be injective, so I asked a question on Stack Exchange; midway through, I realised why.

Exercise 10: Functors preserve the structure of diagrams, so we just need to show that that the unique arrow guaranteed by the coequaliser UMP corresponds to a unique arrow in Sets. We need to show that given a function \(\vert M \vert \to \vert N \vert\) there is only one possible homomorphism \(M \to N\) which forgetful-functors down to it. But a homomorphism \(M \to N\) does specify where every single set element in \(\vert M \vert\) goes, so uniqueness is indeed preserved.

Exercise 12 I’ve already done - search on “wrestling”, though I didn’t write this up.

Exercise 13: I left this question to the end and couldn’t be bothered to decipher the notation.

The final part of the exercise is a simple summary of the preceding parts.

Exercise 15 is more of a “check you follow this construction” than an actual exercise. I do follow it.